Andrew and Kevin love their hockey — and their crokinole! And in this week’s webisode they combine the two to come up with something thoroughly Canadian. Almost every cottage has an old crokinole board leaning up against a wall in a closet. But if you’re like me, you’re probably in the dark about the longtime cottage favourite. Here’s a short history of crokinole. 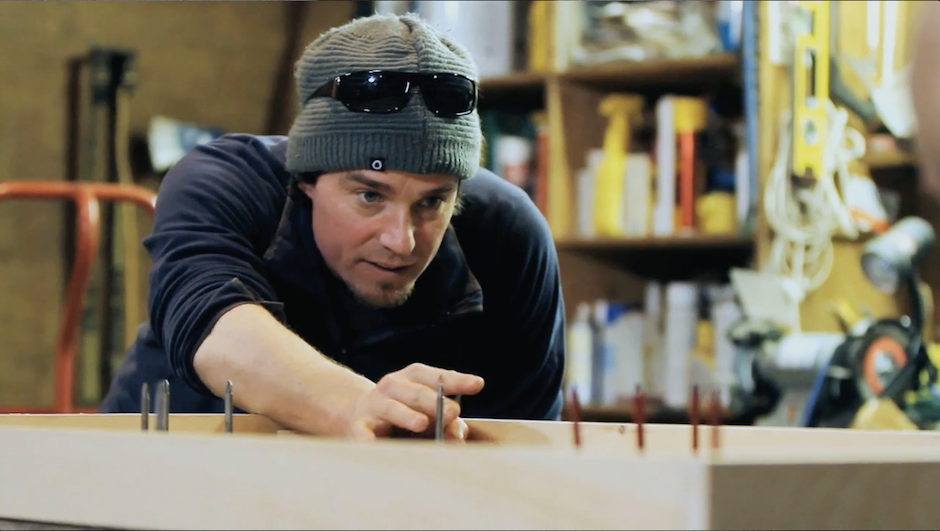 1. Crokinole is a Canadian game. The first board was built by Eckhardt Wettlaufer in 1876 in Ontario. It’s as if he took curling or air hockey and built something you could play on those nights when you’re snowed in. It quickly became popular in Amish and Mennonite communities in Southern Ontario, possibly because it was seen as a less sinful past time than dancing or card playing.

2. There are quite a few variations of crokinole around the world, including the French Canadian pitchnut, Indian and East Asian carrom, Russian chapayev, and Latvian novuss. While board sizes and shapes can be different, all of these games have a few things in common: a wooden board, and wooden checker-like pieces flicked with a players fingers.

3. Crokinole comes from the French word croquignole, a pastry, which in France is something like a biscotti and in Quebec is basically a doughnut that’s not doughnut-shaped. Croquignole is also the name given to another, similar Canadian tabletop game called pichenotte. Pichenotte is popular  in Quebec and most likely was inspired by the East Asian game of carrom.

4. It’s very similar to curling. Many cottage nights have been spent debating the rules of crokinole.  As in curling, you get big points for getting your piece in the hole in the middle, and points for pieces closest to the middle. Plus you can knock the other player’s pieces out of the way.

5. There’s even a World Crokinole Championship, which started in 1999 and is held every year in Tavistock, Ontario, the home of inventor Wettlaufer. In 2005, China hosted the first ever Chinese Championships of Crokinole. This is only the second championship for the game in the world, and they picked the city of Dalian to host it because it’s home to a high number of Canadians in China.

How To Have An Awesome Game Of Street Hockey
1 comments

thanks so much about the history of crokinole. Its really helping me on my research project.