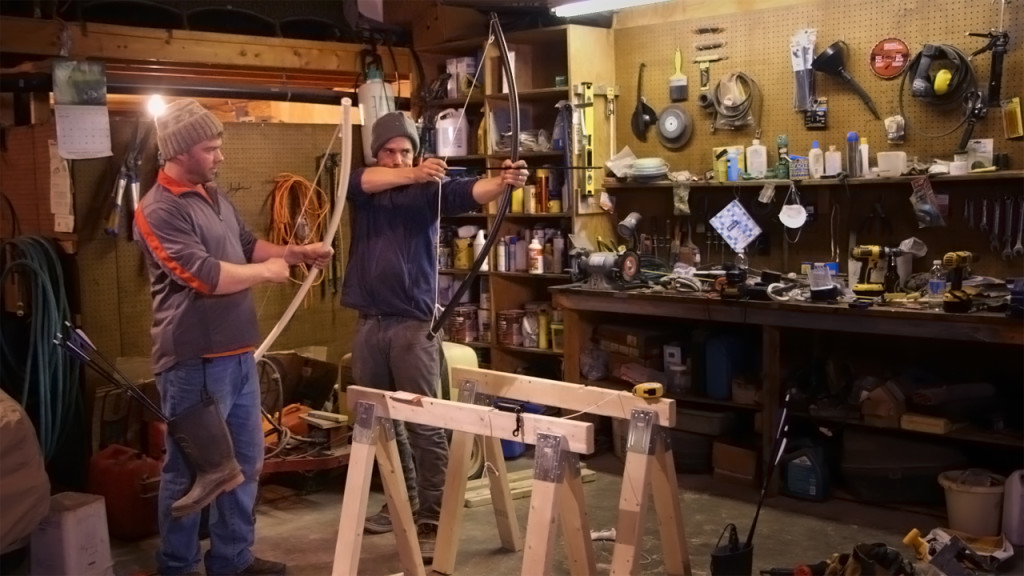 Some projects for Kevin and Andrew turn into competitions. And this one is no different especially when Kevin tells Andrew he could hit an apple off his head. That gives them an idea: a DIY bow and arrow, the bro and arrow.

After following their own plans, they’ll go head to head against each other to see who is best. I mean… if you’re going to fight, you may as well make a project out of it.

Each brother gets to work on their own bow. Kevin plans to reinforce his PVC pipe bow with driveway markers, while Andrew thinks he can cut one PVC pipe and curl it to fit in another PVC pipe.

While the point of the project is for each brother to do it ‘their way’, in the end Kevin ends up giving Andrew a hand. He then adds the final coup de grâce by making arrow quivers out of an old rubber boot.

Outside, Kevin and Andrew set up a bale of hay with a target. It’s much smaller than the broad side of a barn which Andrew (bless his belligerent brotherly soul) thinks Kevin will need.

After playing a bit of William Tell, Kevin comes out the clear winner. Andrew’s bro and arrow isn’t steady enough, and he’s worried it’ll break in his hands. Kevin, at least, hits the target.

After some push-ups for the loser, Kevin takes his winning bro and arrow and tries to hit an apple off Andrew’s head. Thankfully, he hits.

Try the bro and arrow at home, folks. But do not aim at your brother. No matter how much you argue.